Do We Need ABS?

A debate that has been highly contested in the lives of many a rider, the abs vs no abs battle comes off as more of a battle between two classes. No, this isn't about cars, it's rather a question that concerns motorcycles and whether or not it is safer for a rider to ride a motorcycle with abs or without. 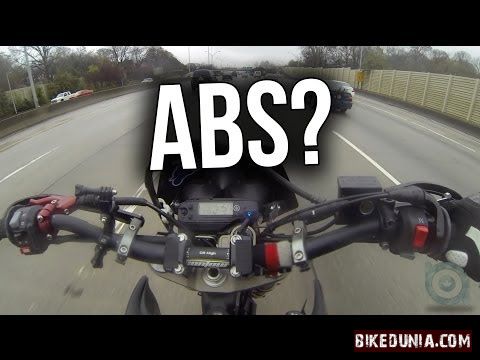 The Anti-Lock Braking System or the ABS, in short, was first put to use on an aircraft; the system being developed by a Frenchman named Gabriel Voisin. But that was 1929, come 1978, and Daimler and Bosch developed the first ABS systems for a series production on four wheels. Of course, there were other major companies that did offer electronic/hydraulic ABS systems even before the European masters got hold of it, but their cars never really made the cut. In 1988, BMW, the pioneers of some of the most advanced technology in vehicles we've seen, put to use it's very own ABS for motorcycles. The BMW K100, the motorcycle that had the rare opportunity of boasting of an ABS system, put on a heavy 11 kilograms post housing the ABS system! Turn a few more pages in history, and you'd find the Japanese offering the ABS system on their bikes as well. Back then, the technology was so crude and complex, that it had several other adjoining elements that severely added weight to the whole motorcycle. As the years passed, the German engineering giant, Bosch, started to develop ingenious ways to create a system that not only weighed less but proved highly effective. The latest generation of ABS units from Bosch weighs just 700 grams! (ABS Base). Talk about weight reduction! 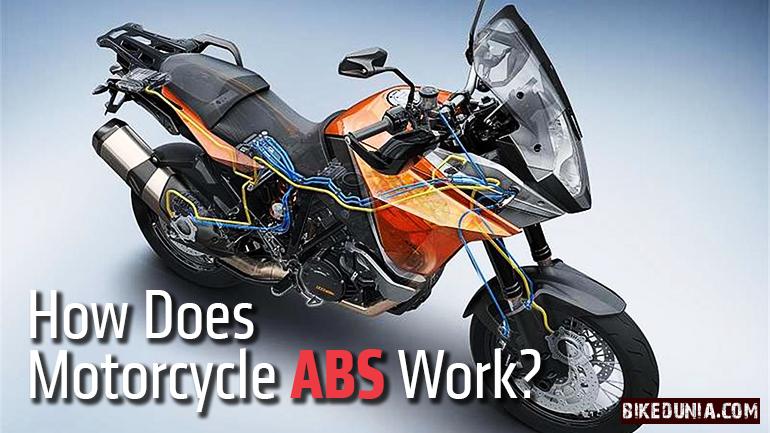 So how does an ABS unit work on a motorcycle? The Anti-lock Braking System on a motorcycle is no different from that on a car. The usual brakes are equipped with dedicated sensors that measure the rotation of each wheel. The sensors then would then gather the data and send it to an ECU unit, which acts as the brain for the ABS. Each bike gets a specific set of ABS units, with specific input values coded into the ECU's.

The ECU is a punctual and hardworking element. It is told by its manufacturers that once the data from the sensors tells him that there will be an impending wheel lock, the ECU orders the brakes to ready itself by sending in appropriate hydraulic back up. To be more technical, the ABS unit has a specified threshold limit. Once the threshold limit has been crossed or the sensors pick up numbers that are far beyond the 'safe zone' or near possible adversity, the ECU immediately sends signals to the hydraulic unit to either hold or release hydraulic pressure, depending on the situation. Does ABS kick-in each time? No, not really. As long as the rider applies brake pressure that holds within the threshold limit, the ABS unit is pretty much unemployed.

However, there is one side of the story that almost everyone seems to have forgotten, calling upon the elephant in the room: a motorcycle has two wheels and not four, unlike a car. A motorcycle can be upset from its normal dynamic position from an external force, say, hard braking, for instance – making it hard to regain control. Besides, the front wheel of the motorcycle deserves more importance than the rear wheel due to the amount of load that gets transferred/transmitted to it. This is a feature of any motorcycle, regardless of ABS. No matter how hard one pulls or stamps the brake lever, the motorcycle is bound to be off control for several seconds. 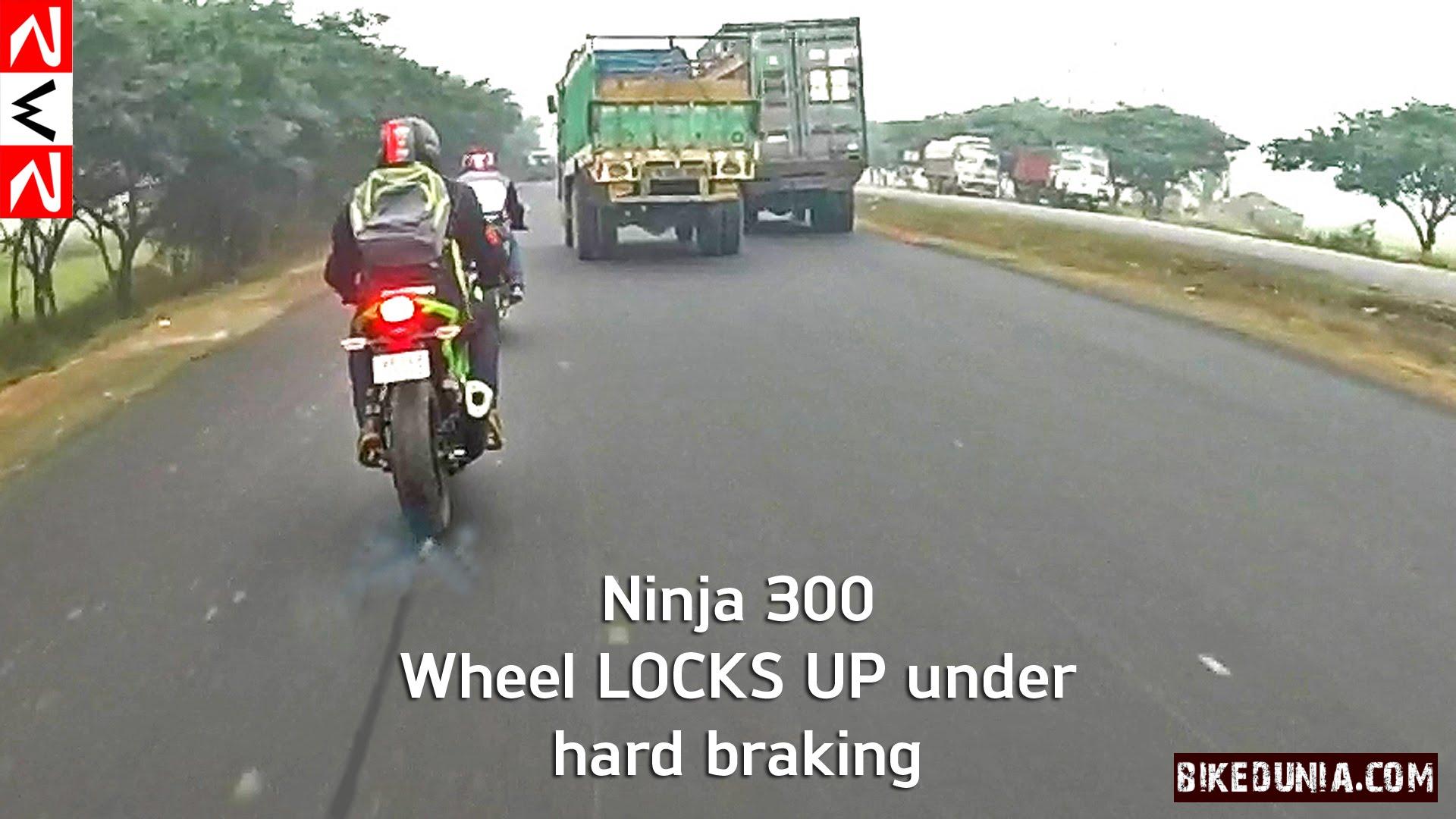 A motorcycle without ABS is pretty much the same when put against one with ABS. However, if there was a case that required hard braking, the ABS equipped bike would fare better because it wouldn't let the wheel lock, thereby giving control to the rider and also reducing the stopping distance. While on the non-ABS bike, the wheels would all be locked up and headed straight for a climax. Now, I would not come to a judgement on whether the ABS systems is essential all together, because the fact of the matter is that during such situations where hard braking is necessary, the outcome of the action can never be predicted. There may be test videos citing many different advantages of the ABS on normal roads under hard braking but there remains a few unexplained areas regarding its operation – a) ABS on gravel/sand covered tarmac b) effective braking distance/stoppage time.

It is highly arguable that any rider with a certain level of profound skill can and will be able to tame any sort of bike given to his hands. However, the amount of skill and the ability to foresee an event while also contemplating evasive action to avoid injury while on the road cannot fully determine the fate of his/her actions, provided the external elements acts positively. Most professional riders would want to get rid of the ABS because it hampers performance by a great mile, and not only that but it interferes with the lap times as well. Take any bike on the track, and you'll be surprised to find none of them using ABS – quite obvious considering the fact that there are no vehicles or other endangering elements standing in the way. On the road, it's a different ball game. This is the space that I have to use to mention about the fight between two classes of riders. The senior riders or the ones who are used to cable pulling, carburetted, mechanical beings with a large dose of crudeness, would always abide by not using the ABS. Their reasons are basically used to contain the spirit of riding, while it has nothing to do with the technical/analytical or safety point of view. The other class, or the more recent breed of riders are more conscious and not as wild-spirited as their senior folk. This class of riders acknowledge the use of ABS as a life-saving equipment and would recommend spending a little more for those who want to get on their first bike. But would they ride a non-abs bike, if they were offered one? It remains totally subjective. 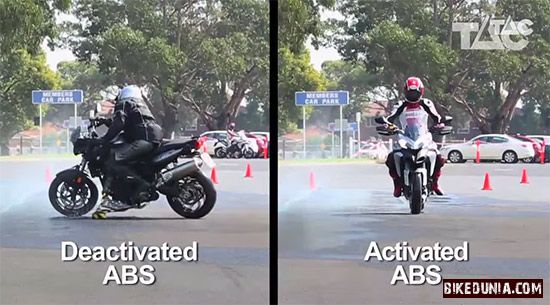 Well experienced riders often go for bikes that have switchable ABS that lets them switch off the ABS, or there are systems that control the amount of braking in each wheel, whatever that suits the rider. But all these cost a fortune, and may not be a practical option for the commuter. So, in countries like India, manufacturers have offered single-channel ABS systems on their new products, adding a few points on the safety aspect, although, getting a higher price tag. Ultimately, it all depends on whether the buyer is willing to churn out that extra bit for safety or that he sticks with the attitude of greater savings by compromising on safety. The debate is indeed complex, but technology is evolving and it can't be stopped.
Written by Vikas Vinod.
Last updated on 12-08-2015. Published on 12-08-2015.

Where ABS is concerned i feel it should be mandatory , or should be given a choice to buyers from all 125cc segment onwards, i ride a ktm 200 which fish tails every time u land up braking hard, which makes it very unnerving on wet roads,so it should be compulsary implicated.
By Santosh Nair on 01-09-2015