The English Motorcycle giant Triumph has unveiled two new special edition bikes based on the Triumph Bonneville, the Venom and the Barbour International Triumph 1 Street Tracker.

The Venom comes off as a military – styled bike made in connection with the launch of the new Metal Gear Solid V: The Phantom Pain PC game. This is not the first time however that Triumph has collaborated with the game developers Konami and the Bonneville being used starting from Metal Gear Solid 3 and now featuring in the latest edition of the game. Triumph's Venom is an entirely in – house designed bike with much emphasis given to the main character of the game, Snake. As most of us would remember, Snake is someone who has to traverse difficult terrain and overcome unwieldy obstacles to get to his target. The Venom is a bike that deserves to be put to the test and it will still ask for more. There are no fancy electronics, no gauges or even mirrors. The bike comes with all terrain Continental TKC80 tires devoid of any mudguards and adds to the aggressive feel. A yellow covered headlamp strikes the first blow and the rest of the bike is completely blacked out to add to the character's notoriety as being a vicious hunter even in the dark. A reworked saddle with Sneaking Suit Neoprene and Carbon Kevlar leather adds to the appeal. An ammo rack sits at the end and can easily house a few rounds of ammo just in case there's a need to go all out on Snake's enemies. 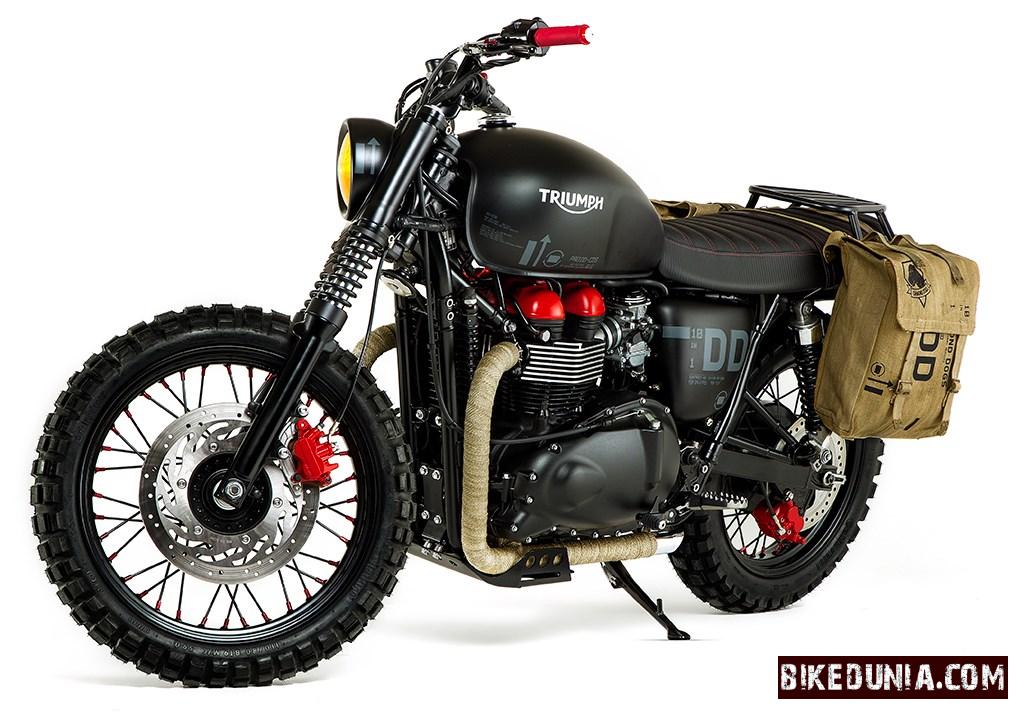 The suspension in the front – end has been given a heavy – duty makeover and the forks get a black paint job as well only to exaggerate the aggressive stance. The handle – bar grips, brake calipers and cam covers get brilliant red detailing and should make the bike stand out from the rest. Mechanical changes include a Renthal Performance Sprocket, machined throttle body caps and Triumph's own sport levers. Livery has been done with a stenciled matte black finish.

Venom would début at the MCM London Comic Con event and would surely be turning a lot of heads.

The Barbour International Triumph 1 Street Tracker or the BIT1 is another bike from Triumph's custom design line that was unveiled just after the Triumph Venom was launched. 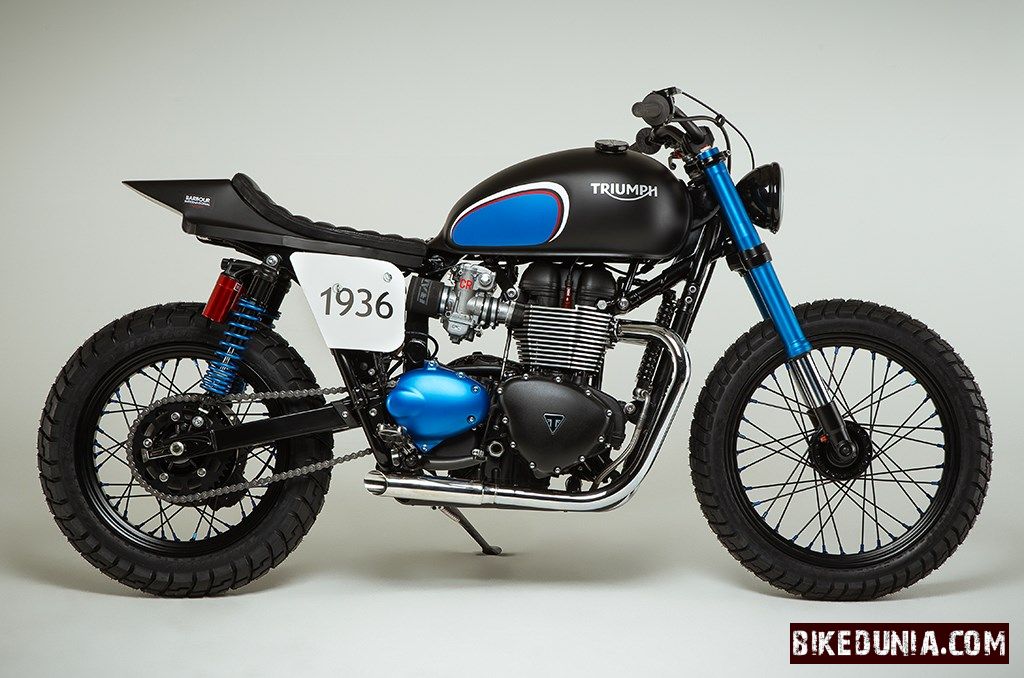 The BIT1 is a special edition bike that is made in collaboration with Barbour, a clothing brand. A stripped down version of the Bonneville, it lacks everything that a modern bike proudly wears. Pillion pegs, subframe, battery box, metal support for the rear passenger have all been removed. In short, the BIT1 is a crude but aptly ripped version of the Bonneville. The frame has been given a complete makeover and newer parts have been installed. The front suspension has been taken over from the Street Triple R and the rear is gifted with a custom K-Tech Razor shock unit. The engine seems as though it went on a diet with the fuel injection system being replaced with a tradition carburettor and exotic slash cut exhaust pipes. A custom Redmax Speedshop seat adds to the flat-track racing style and the bike following the flat-track custom has no brakes in front. Did someone mention Mad Max? 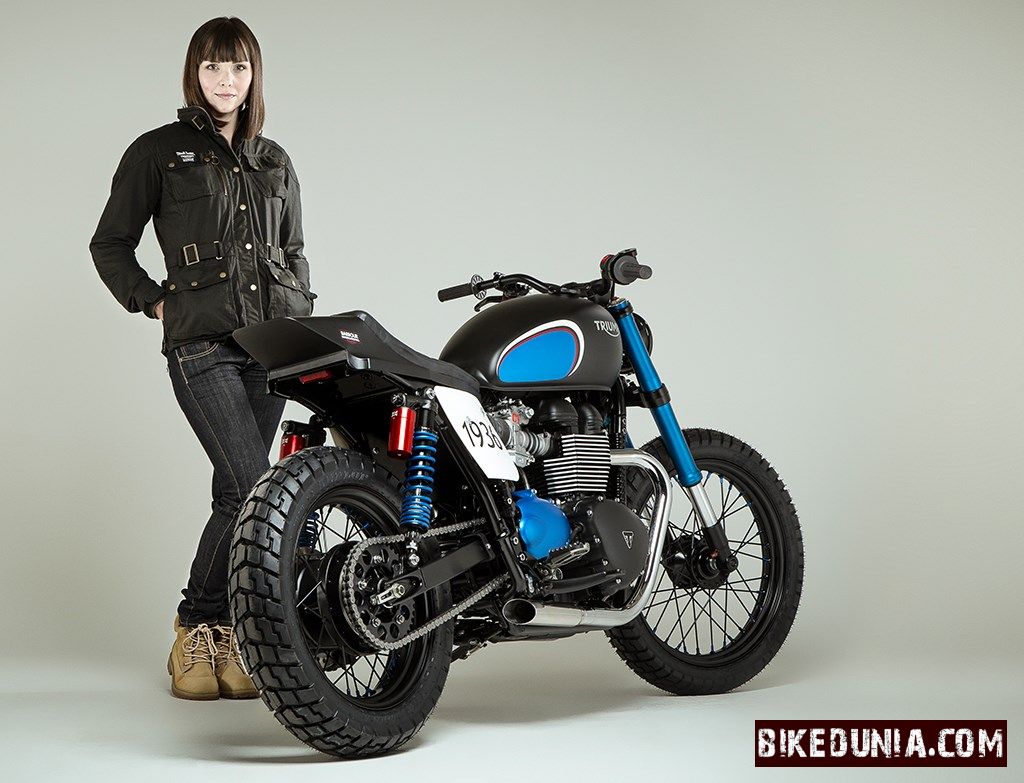 Collaborating with Triumph, Barbour has created a custom jacket specially for the partnership and the jacket has approved armour on the shoulders and elbows and a belted waist. All said and done, the BIT1 will not be on sale clearly because it is far too uncivilized for the “society”. However, the custom jackets will be up for sale in Triumph Dealerships and the BIT1 will be on display at select venues.
Written by Vikas Vinod.
Last updated on 03-06-2015. Published on 03-06-2015.