BIKERS' TATTOOS - All You Need To Know

Here is a special write up for those interested in Bikers' Tattoos and what they mean to a Biker.

Tattoos are the symbols of self-reflection. The most expressive pieces of one's adornments and something through which most people send a message out to the world. For a biker, the tattoo goes beyond the limit of being a mere incision on the skin. The long hair, the thick leather jackets, heavy metal bikes and the constant roar of the bike's engine get materialized in the biker's tattoo. It quits being a mark in ink and begins to act as a symbol of liberation. Most biker tattoos are marked by bold, strong, rebellious designs which represent the open roads that this group of people enjoy the most. 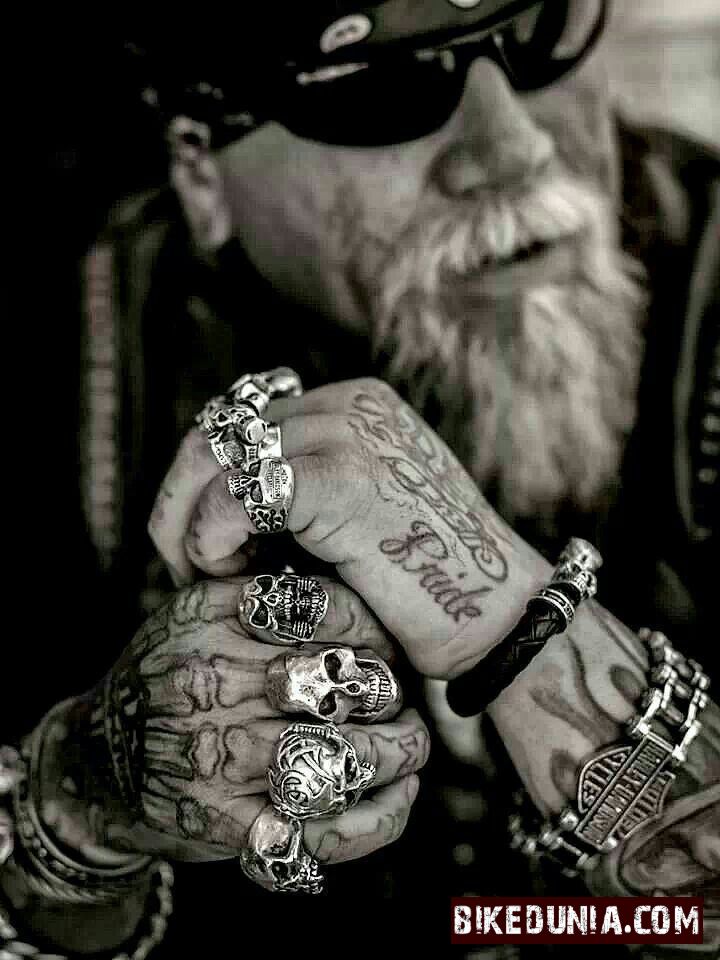 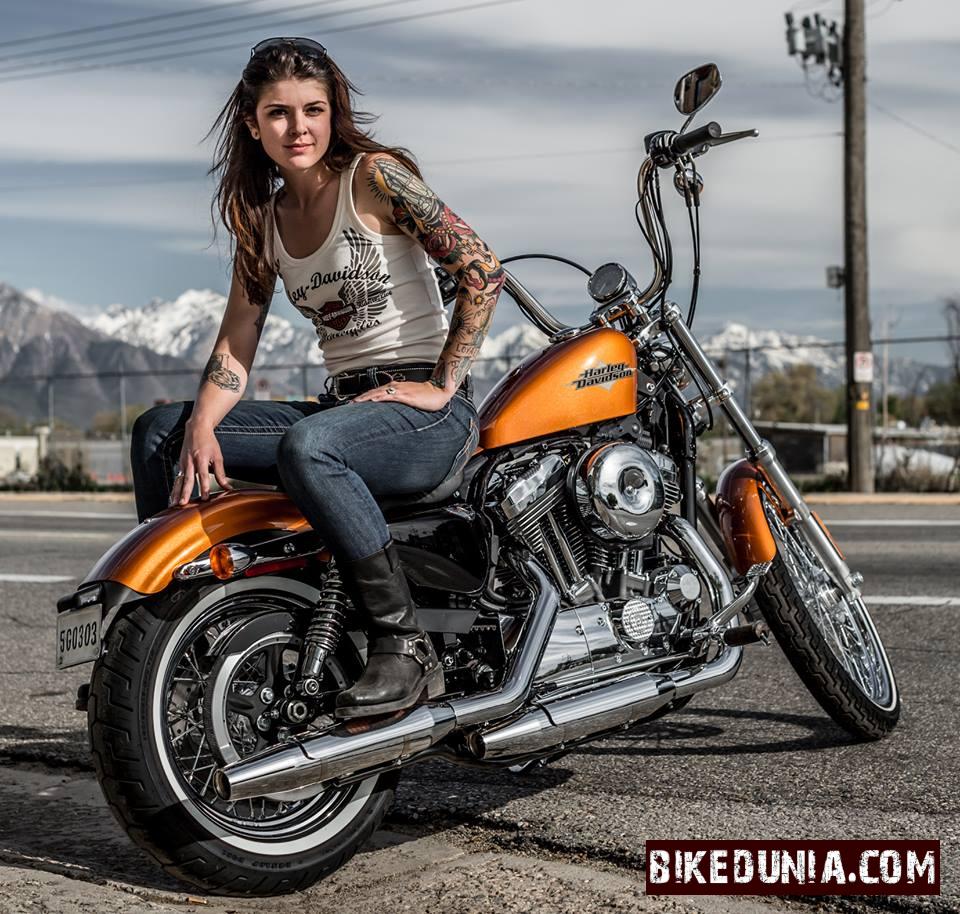 The Harley Davidson riders make it a point to seal their love for their machine promptly by etching themselves with its logo. A sentiment of living on forever or immortality is associated with such a profession of their devotion to their riding passion. Picture an eagle perched on top of a ‘Harley Davidson’ banner or epithet like ‘Ride Free’ and you will find the underlying emotions of love for freedom, the desire to ride free and a sense of non-conformity engulfing you! Other symbols include eagle wings and the classic orange and black bar and shield Harley logo. 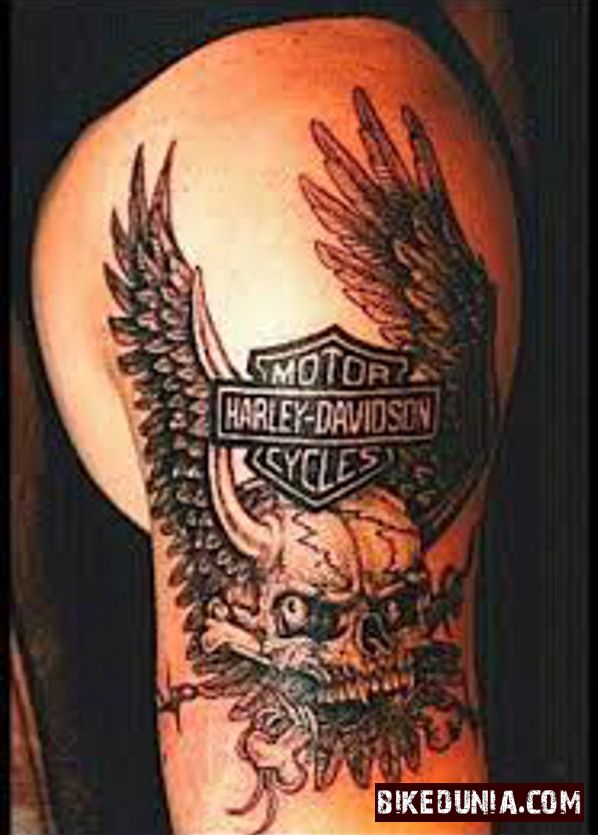 WHAT TATTOOS SYMBOLISE TO A BIKER?

To a true biker, the free road is his life and his bike, his lifeline. The feeling of touching the wind with his free palms and the sense of exhilaration when his machine is one with the road, is beyond words. Similarly, his tattoo is like a declaration of his fidelity to his eternal partner- his Bike. A biker chooses, just like he makes every choice on the road- to stop or to move on, to accelerate to slow down, to halt to race, to turn to keep going ahead, to represent his personality through his tattoo. 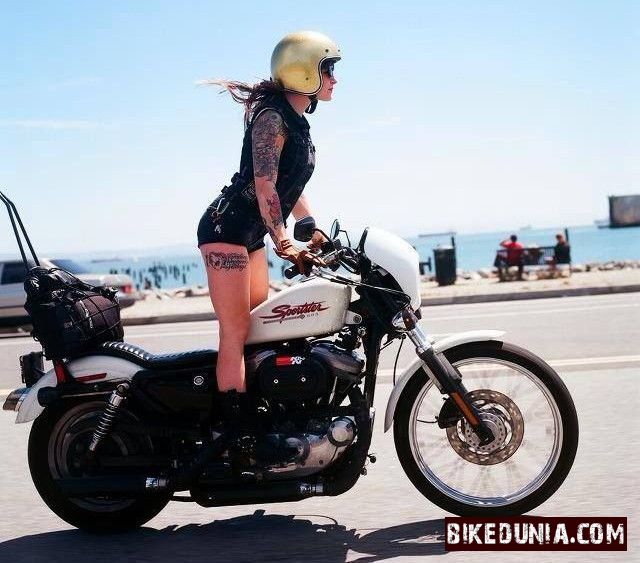 Biker tattoos are known for the area of skin they cover. You can definitely be sure that they are not small. Popular sites that bikers' liked getting inked are, the back of the neck up to the waist, arms, chest and forehead. Women bikers also can be expressive through tattoos on their bellies, behind the waist and on their ankles. 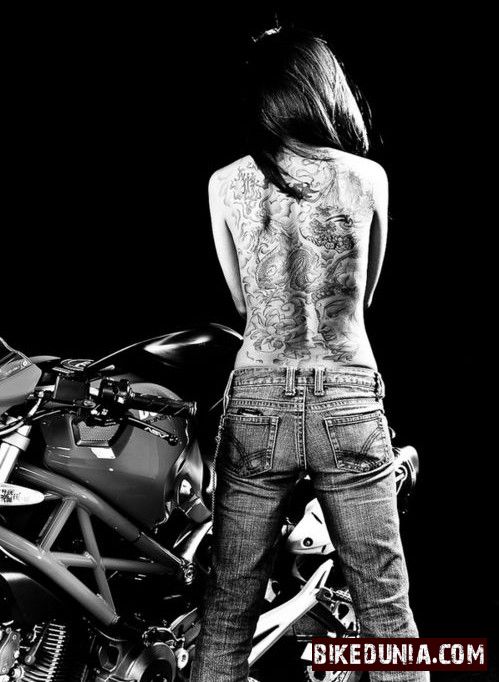 The whole idea of getting inked is to be able to pass on a message. And so, bikers chose their tattoos well. Even the area of tattoo has great relevance as it has to be publicly visible. For many, getting a tattoo is an ultimate form of commitment to their lifestyle. Greater the number of tattoos, greater is the declaration of one's loyalty to the biker brotherhood. Even though the biker's tattoos are bold and often conceived as anti-social, it symbolises an acceptance of his surroundings and his non-conformity to it. Human beings face issues every day and each person is affected equally by the working of this world. Family, employment and emotions are not strangers to a biker. What makes him stand out is his outlook to all of this. It is his individuality which drives him to come out and speak his mind. It is his choices which define every aspect of his life. This is exactly what his tattoo seeks to do as well. The tattoo of his bike or his brand or his allegiance to his machine are in fact, his way of dealing with issues. No, He is not a loser. He is not a quitter. He learns from the lessons of the road. The biker is equipped with experience enough to judge people and to differentiate between a friend and a foe. 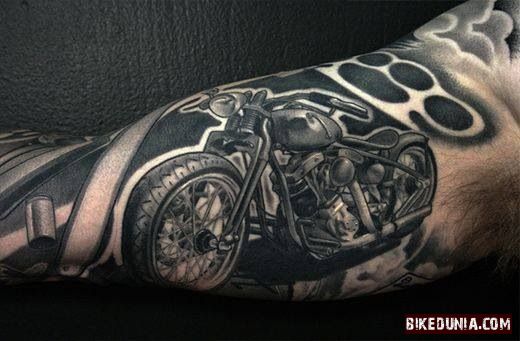 The biker tattoo may mean different things to different people but to a biker, the tattoo is a sign of total commitment. Commitment to his lifestyle, to his personality and a commitment to his beliefs. The biker decides to mark himself eternally with the vow of never backing out of any circumstance. The most common example of the bikers' sense of duty is reflected in their causes for the society. Be it a Gay Pride Parade or AIDS awareness drive, be it a coastal clean up programme or an awareness programme against liquor, drugs or toxic substances, you find these socially responsible bikers coming out in large numbers to join the local authorities. Their bikes transcend the boundaries of personal freedom and liberation to become a saving grace for mankind at large. 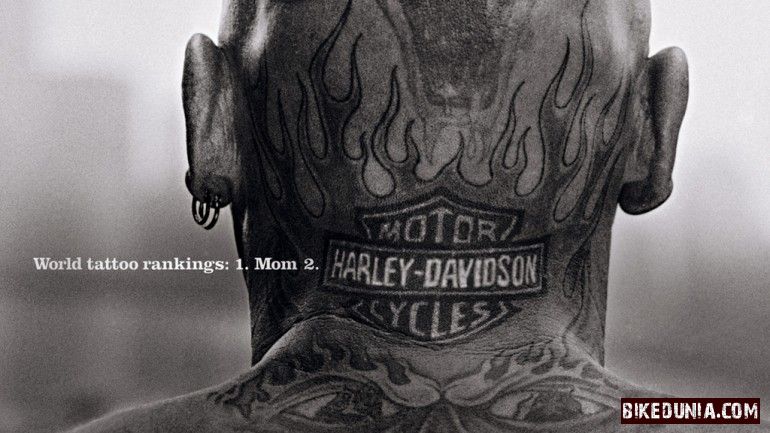 As mentioned earlier, bikers prefer getting tattoos on the exposed parts of their bodies. Most bikers would have got their first tattoo etched by piercing ink into themselves or by a single needle acting as rotary devices run on a motor. The first tattoo usually marks the beginning of the bond between the rider and his machine. The second tattoo and the ones following later are instruments through which the bond gets fortified over a period of time. Their tattoos are undoubtedly loud and considered largely anti-social. Yet, bikers' tattoos stand as universal symbols which are easily understood by other members of the bikers' fraternity. They are not like the conventional main-stream tattoo designs and are very communicative. Popular symbols on bikers' tattoos include:

Skulls: The most popular choice is the skull or a skeleton, combined with flames, a snake, glowing eyes, etc. The flaming skull is a Hell's Angels insignia. AFFA stands for “Angels Forever, Forever Angels” and is aimed at bringing out the fearlessness and chivalrous character of the biker. 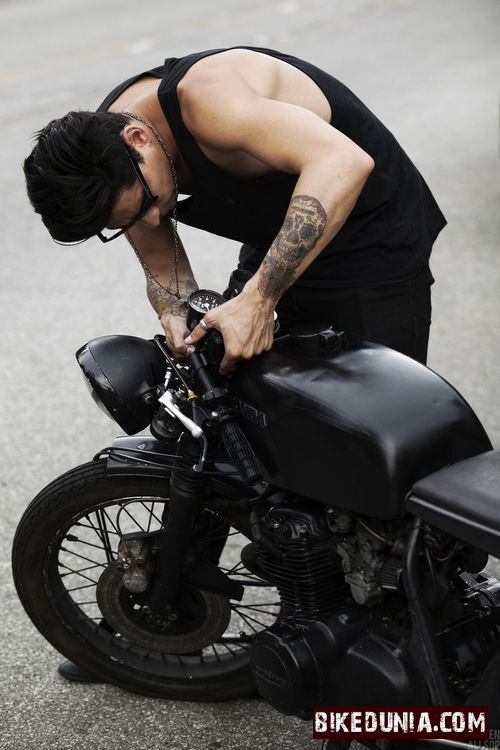 Eagles: These are the symbol of the United States and a common choice for bikers, who are usually very patriotic. This sign is representative of their freedom and their rejection of not accepting the norms of the society. 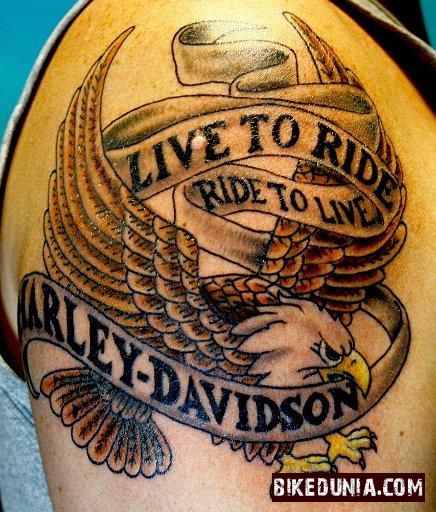 Machine Parts: A motorcycle or motorcycle parts (most frequently the engine or V-Twin engines). This kind of tattoos show the bikers' passion for riding. His freedom and individuality materialises on road while he rides. 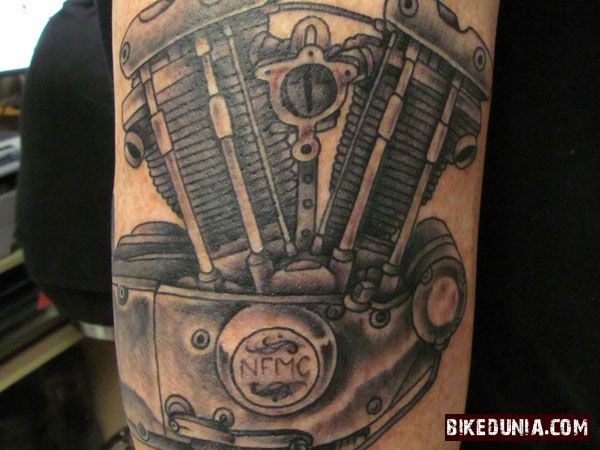 The American Flag: Most usually a sign of patriotism clubbed with social responsibility and with the desire to be able to contribute through civic activities. It also is representative of Harley Davidson Motorcycle Company's origin. 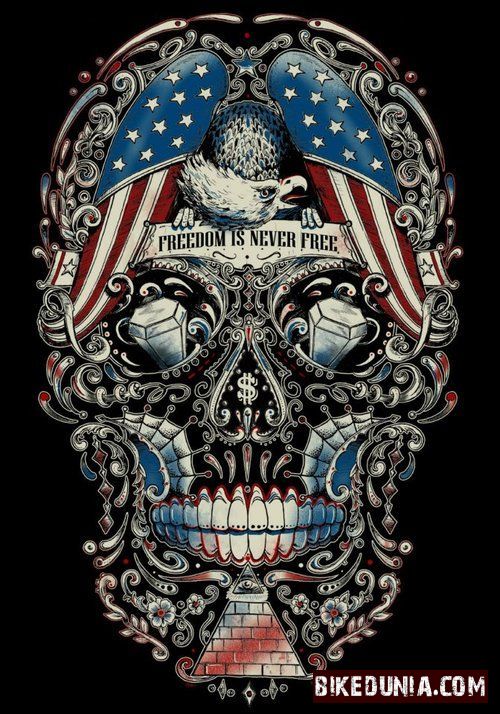 Hearts: These are a common theme for the ladies, usually combined with bows or ribbons, barbed wire, etc. These tattoos usually stand for their unacceptability of the feminine identity that is slapped on to them by the society. They are the makers of their own destiny and are not afraid to be expressive about the same. Another popular form of tattoo design among female bikers includes the " This Property Belongs to (name)" which is their open declaration of fidelity to their partners. 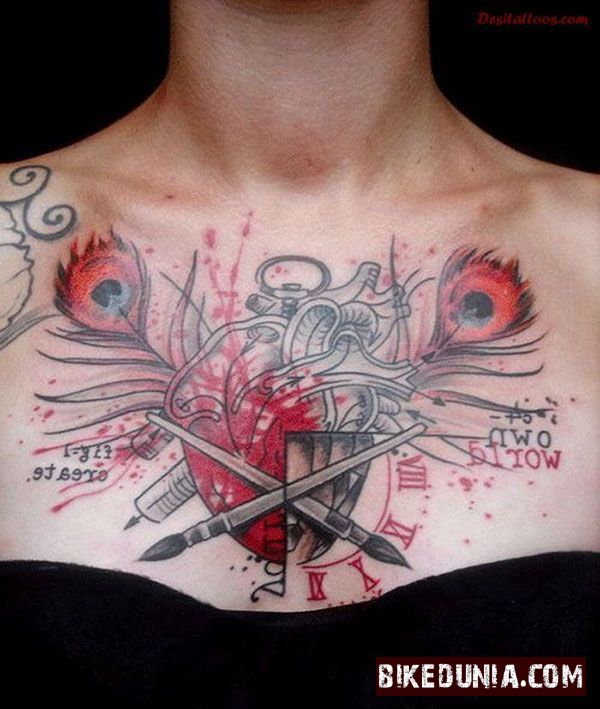 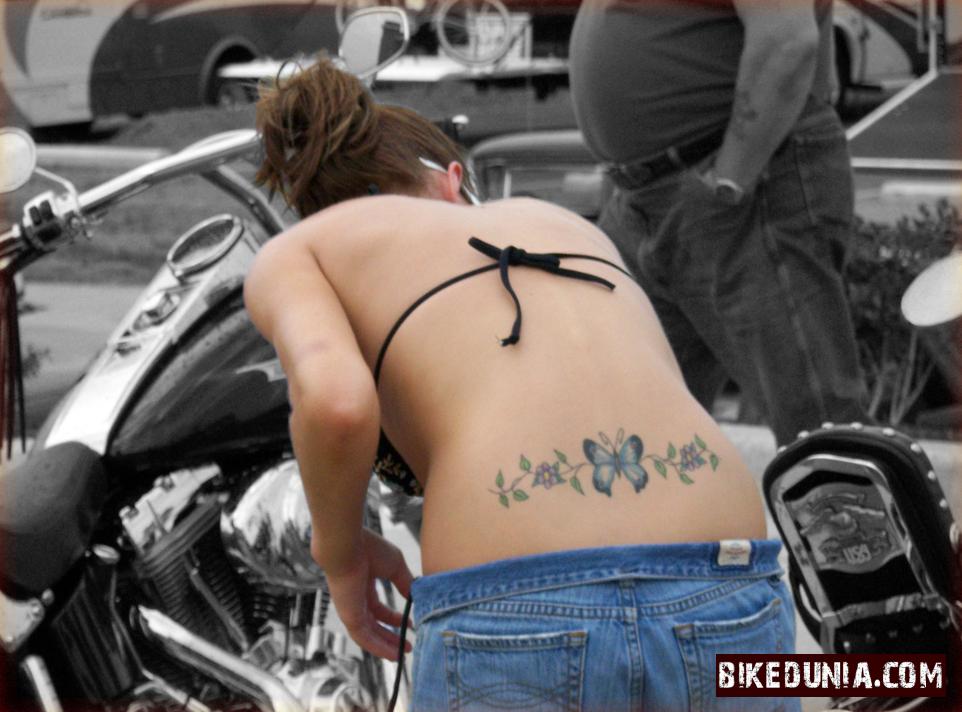 Logos and Oneliners: Club logos, marijuana leaves, symbols and texts like; FTW (F**k The World), born to lose, live to ride, ride to live, blazing tires/wheels, women, daggers and dragons are other all time favourites. 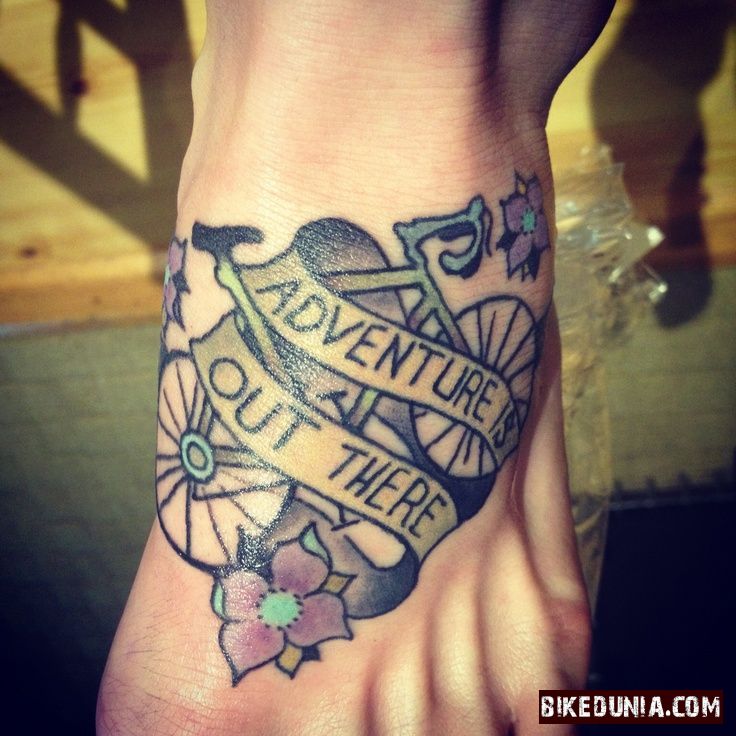 SOCIAL CONSTRUCT OF THE TATTOOED INDIVIDUAL

It is not surprising that many people tend to view tattooed individuals with a dubious attitude. In fact, In a graduate paper submitted by Richard S Post to the School of Police Administration and Public Safety at the Michigan State University in 1965, the connection between tattooing and criminal behaviour was studied vastly. Even through the history of tattoo we find that tattooing was a culture initially limited to sailors and slaves. Only the men and women of lower social hierarchy took up tattooing. Thus a natural stigma has developed towards tattooed individuals. 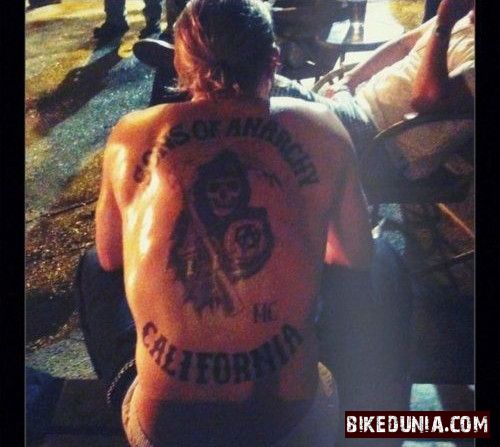 The biker's tattoo on the other hand started gaining popularity with the tattoo rage of the 1950's and 60's in the US. In fact, the Mexican form of tattooing had picked up well. Soon the cowboys of the west were replaced by the bikers. Hugely built individuals with intense appearance and extensive tattooing marked the distinct features of the American Bikers. It wasn't before long that people in the east picked up the bits and fragments of the bikers' freedom and began a culture of their own. 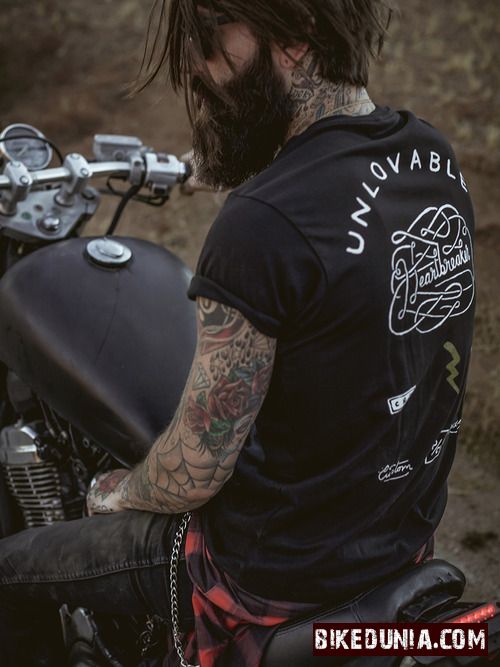 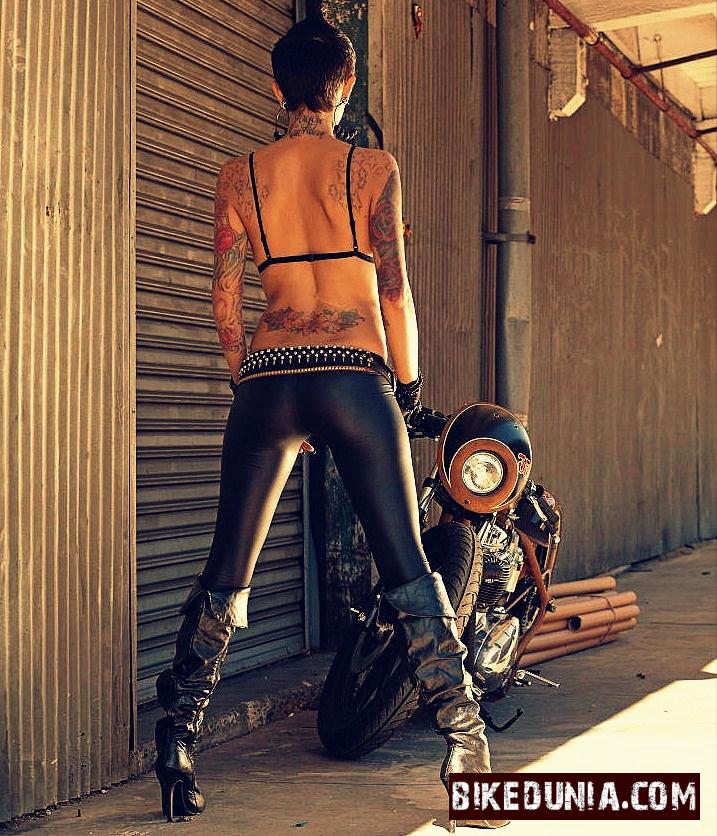 The most interesting aspect of the biker fraternity is that there is almost a uniform code of conduct even across international borders. The tattooing tradition has also thus picked up momentum and has gained popularity in several local biker's forums. The fact that tattooing as an art has penetrated main-stream culture and that several office-going and college-going individuals are getting inked, has still not dimmed the sheen of a Biker Tattoo. It still remains a prized possession and also a symbol of pride for the biker. 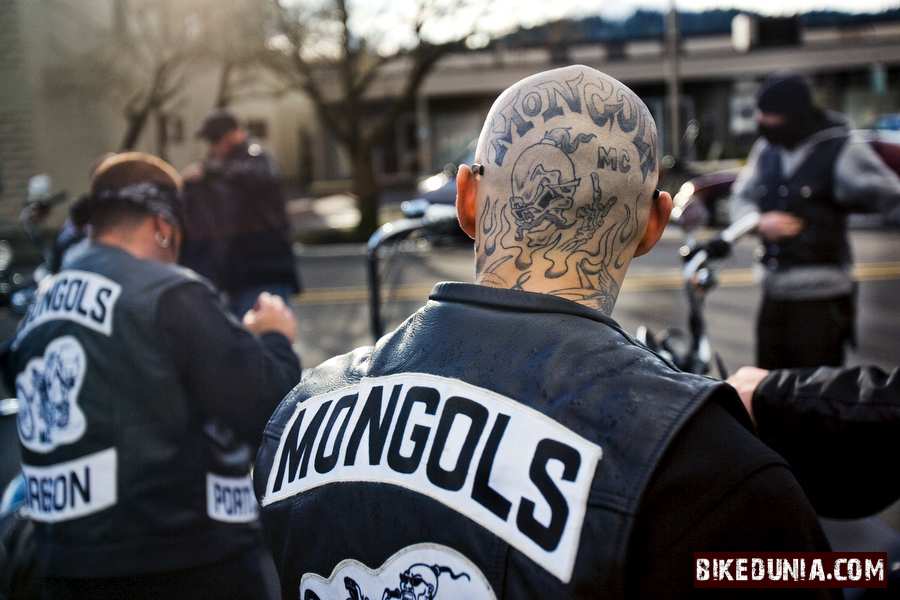