Why the Dakar Rally bike stands out

The Dakar Rally is one of the most prestigious and at the same time one of the most gruelling, torturous and nerve-racking races in the world. Dating its origins back to 1978, when Thierry Sabine, a French rally driver who got lost in the Tenere Desert (south central Sahara), a year before, decided that the desert was a good location to hold the rally.

The first rally which was held had 182 vehicles at the start and 10,000 Km later, 74 vehicles had survived the first ever gruesome race. A rider named Cyril Neveu holds the distinction of being the first Dakar Rally winner using a Yamaha motorcycle XT500. 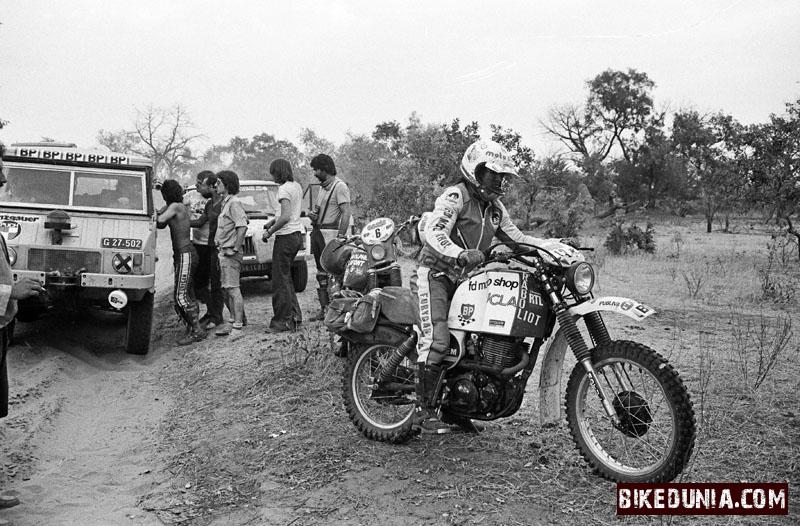 Unlike the other rally events, the Dakar rally is more a rally-raid than a normal stage by stage rally edition. Meaning, the stages are much longer and can probably last a 100 miles or more. Being a pure off-road racing event, this event brings in both Professional and Private/Amateur teams from all over the world. Currently, the most notable team in the motorcycle league is the Red Bull KTM.

After the win by Marc Coma in this year's edition of the Dakar Rally, KTM extended its title lead by 14 consecutive titles. 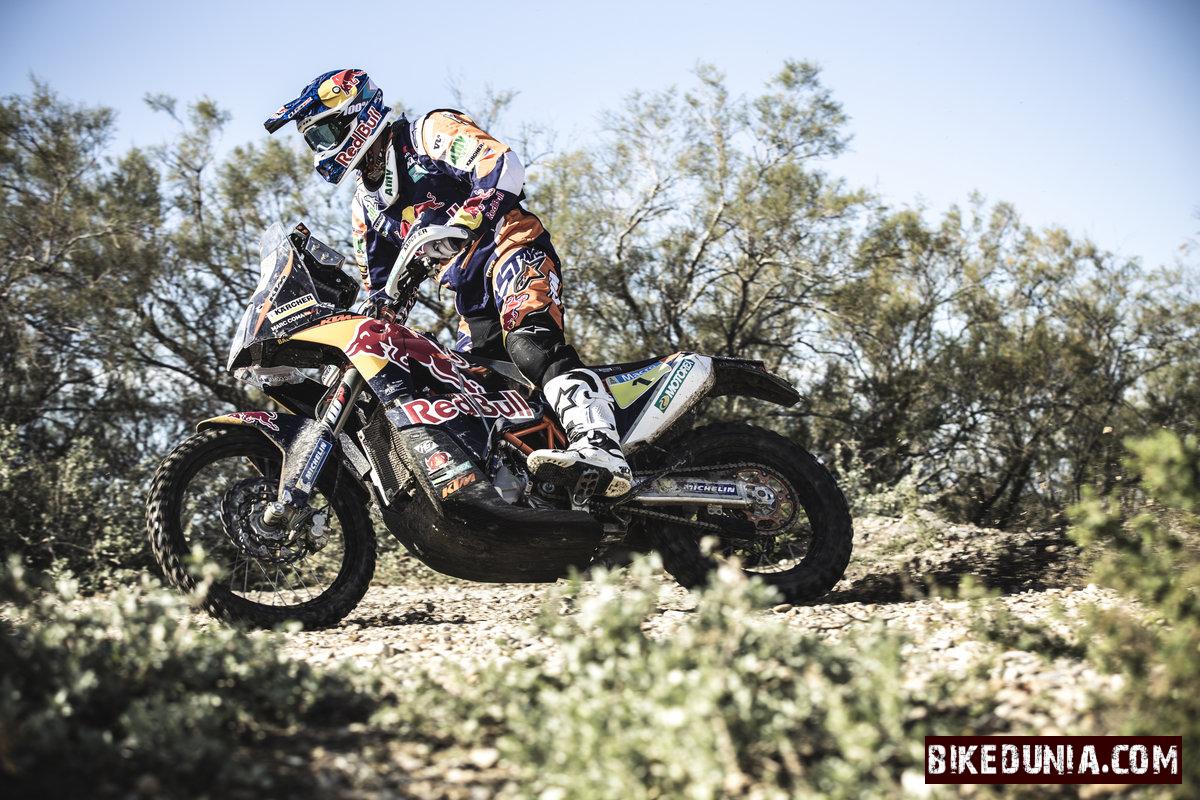 The difference between your dirt bike and the Dakar spec bike

The normal production model KTM 450, uses a 450cc engine and weighs at around 109 Kg. However, when it comes to the Dakar rally specific model, the stakes are lifted higher, way higher. Although the engine remains the same, the components of the engine are heavily modified to suit the requirements of the ominous hell these machines are about to foray into. A specialized body kit ranging all the way from the headlights to the tail lights, gets its place on the bike to overcome the elements of the desert that includes the sand because these tiny particles can make their way through the intakes and make life much worse for the riders. The normal bike on the contrary, would only have limited plastics with the reasons being obvious. All of the additional elements on the bike increases the overall weight to a whopping 170 kilos or more.

Now, some might remain with the usual notion of “less weight=better stage times” however, the Dakar rally is an event where both man and machine are tested to its limits. A normal motocross bike would remain on track for about 35-40 minutes depending on the race while a Dakar bike stays for more than 12-16 hours, continuously on the throttle, without the slightest hint of what might go wrong in the next 100 remaining miles. As a result, the fuel tank capacity differs a lot too with the Dakar version getting a tank that reminisces the size of Jupiter at about 34 Litres. 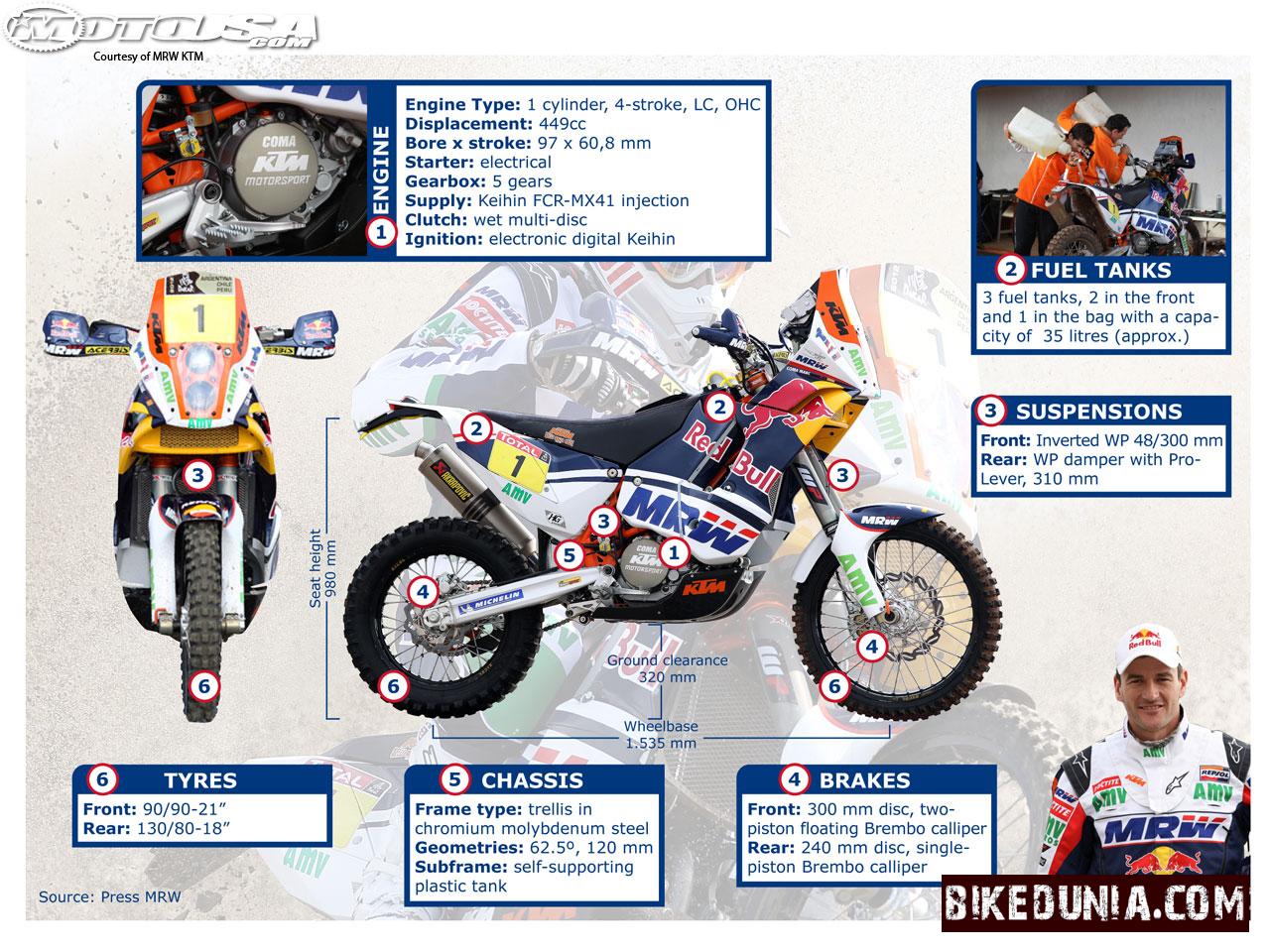 The average speed of the Dakar bike is well north of a hundred miles citing the reason that there are not many corners in the desert (pun intended). Since the inception of this race, many a driver have lost their lives to the gruesome conditions of the race. Only recently did the governing body of the Dakar rally introduce speed limits i.e 150 kph, to allay the fears of fatalities during the race.

Due to the fact that these bikes are constantly being revved and maintaining a high rate of speed, the engines have to be cooled down to reduce the issue of overheating. Although the Dakar bike is equipped with a normal radiator as seen on the production model, the proportions are different. The large size to compensate for the heat developed from the engine. 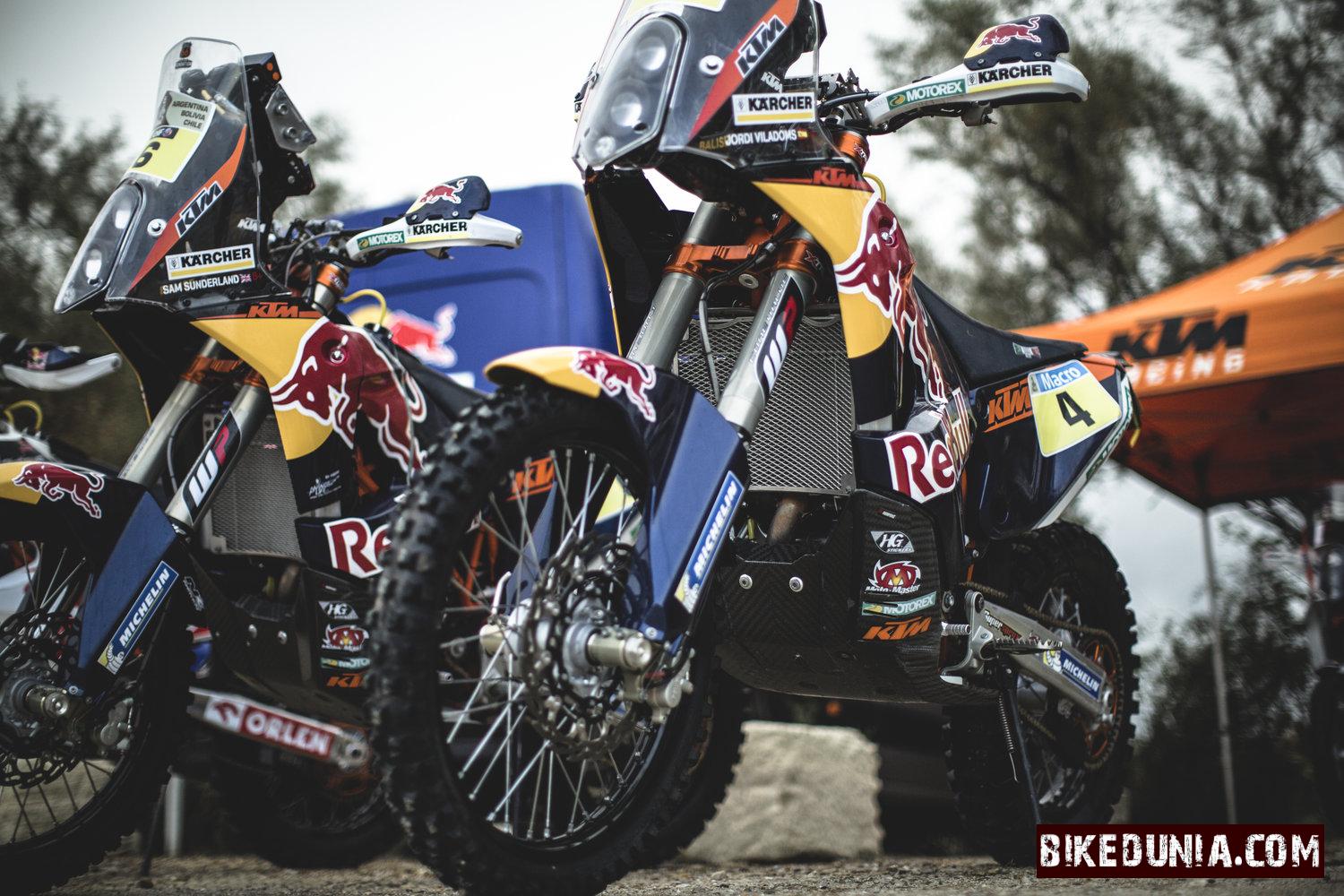 It's a desert and the rider is basically in the middle of nowhere with only his navigational equipment and sheer wit and courage to help him go further. There's no turning back for any of the participants because there is no place to go back to, the stage shelters (bivouac) move faster to the next stage start using Russian cargo aircraft and special trucks.

In case of a mechanical failure with the bike, specialized tools are equipped on the bike to temporarily manage the issue.

All bikes are fitted with satellite receiver systems and also a satellite beacon called 'Balise' to help a rider if he gets lost or if the rider is in need of medical assistance. The bike sends a distress signal to the satellite and a helicopter is sent right away.

A sweep truck is another service that is used in the rally where the riders can either choose to or not, to seek help during a catastrophic failure. Any participant has the choice to opt for the waiver or do the whole thing alone. However, the Sweep truck might be two days behind. 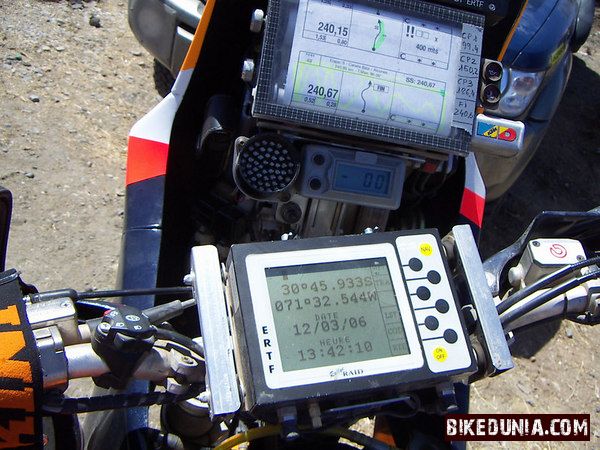 The most common of all the bikes that private teams choose, according to current times, would be the KTM 660, which gets a proper makeover to compete for the race. 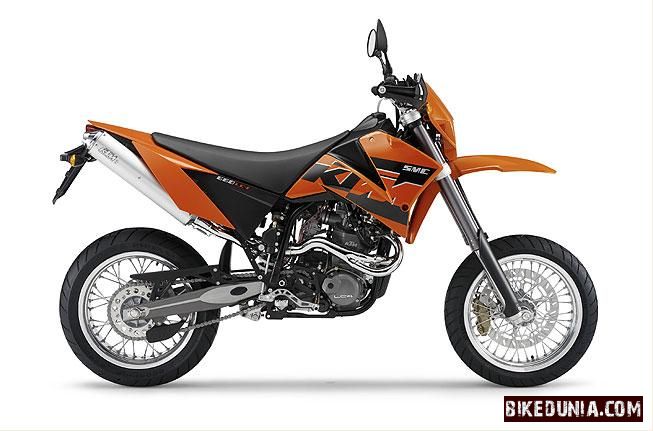 The bike that the Red Bull team uses is the KTM 450. The benefits of working with a professional team is highly desirable and the availability of the team mechanics and strategists take the professionals, a step higher than the private teams. 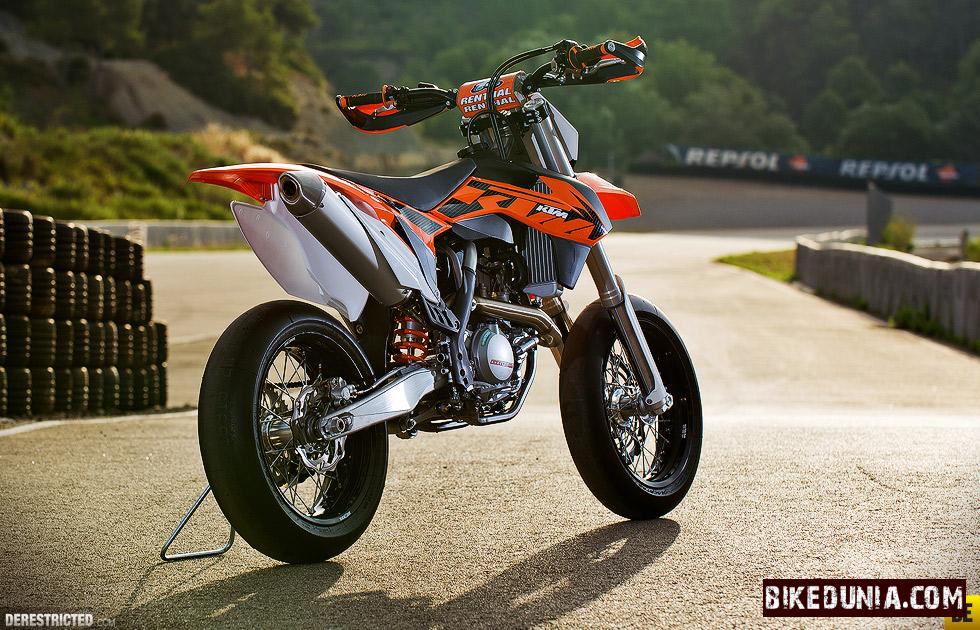 It takes a high level of physical and mental fitness to compete in this rally raid and bear in mind that it is not an event for the feeble minded. A race through hell on earth. 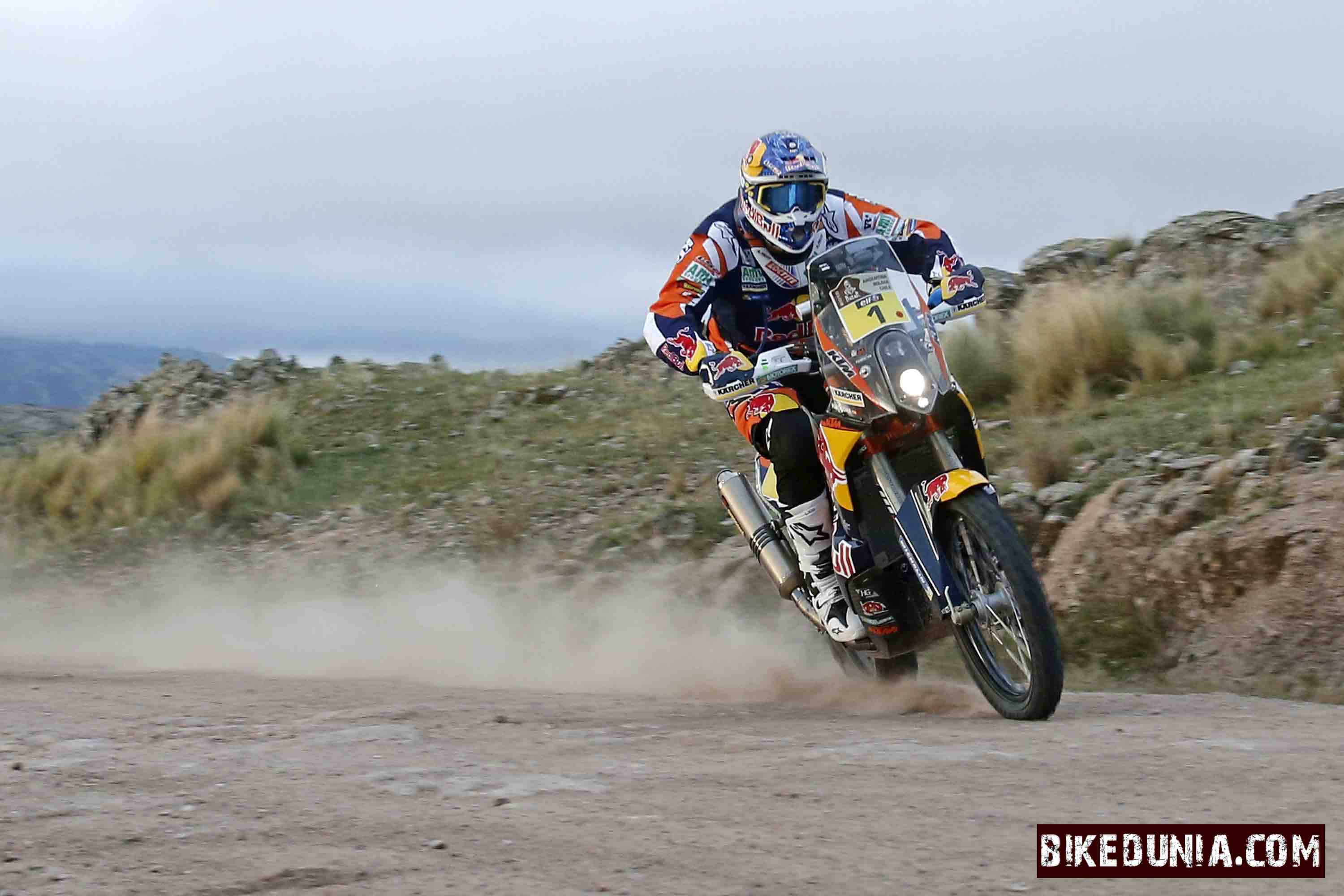